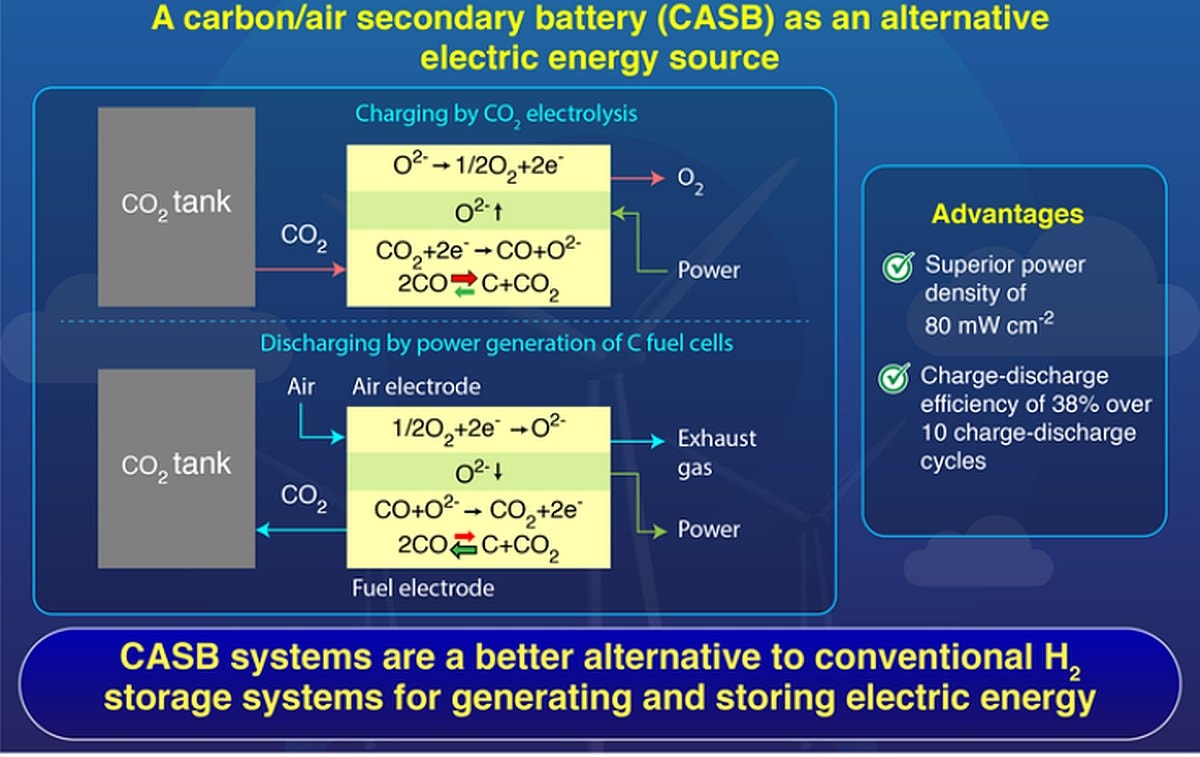 The power sector is undergoing a rapid change globally as the world shifts to renewable energy and cuts down on using fossil fuels. However, a big roadblock to generating electricity from wind and solar energy is their intermittent nature due to unfavourable environmental conditions. To address this problem, storage was found in hydrogen batteries. But these, too, suffered from poor efficiency and required massive space to build, which made them complex for thermal management. Now, researchers at a Japanese institute say they have found a way to make renewable energy more efficient.

The alternative system proposed by the researchers from Tokyo Tech uses carbon, instead of hydrogen, as an energy source. It is called “carbon/air secondary battery (CASB)” and comprises a solid-oxide fuel and electrolysis cell (SOFC/ECs) where carbon generated via electrolysis of carbon dioxide (CO2) is oxidised with air to produce energy. The SOFC/ECs can be supplied with compressed liquefied CO2 to make up the energy storage system.

In their research published in the Journal of Power Sources, the researchers said the CASB system combines CO2 electrolysis for C charging and power generation of carbon fuel cells.

They said they have demonstrated for the first time repetitive power generation (10 charge-discharge cycles) with Boudouard equilibrium without degradation. The CASB system was able to utilise most of the carbon deposited on the electrode for energy generation, achieving maximum Coulombic efficiency of 84 percent, charge-discharge efficiency of 38 percent, and power density of 80 mW cm−2 at 800 degrees Celcius and 100 mA cm−2.

This suggested that the test of CASB system suffered no degradation of the fuel electrode. The charge-discharge cycle is an indicator of battery performance.

“Similar to a battery, the CASB is charged using the energy generated by the renewable sources to reduce CO2 to C. During the subsequent discharge phase, the C is oxidised to generate energy,” Prof. Manabu Ihara from Tokyo Tech told in a statement.

The research holds great promise for accelerating the world towards renewable energy.